​​Jody will be appearing in cabaret performance in "10th Time’s The Charm" on October 26th and 27th, 2017 at the Richmond Triangle Players Theatre in Richmond, VA. The  evening's performance will be a synthesis of musical theatre, jazz, opera, and rock, and through song and story he will bring a touch of nostalgia and personal style to highlight a career in music and theatre that has spanned over 20 years.

In October 2016, Jody portrayed John Dickinson in Virginia Repertory Theatre’s production of 1776, a musical with music and lyrics by Sherman Edwards and a book by Peter Stone. He first portrayed Dickinson at the Moonlight Amphitheatre in San Diego, CA to critical and popular acclaim.

The story is based on the events surrounding the signing of the Declaration of Independence. It dramatizes the efforts of John Adams to persuade his colleagues to vote for American independence and to sign the document. 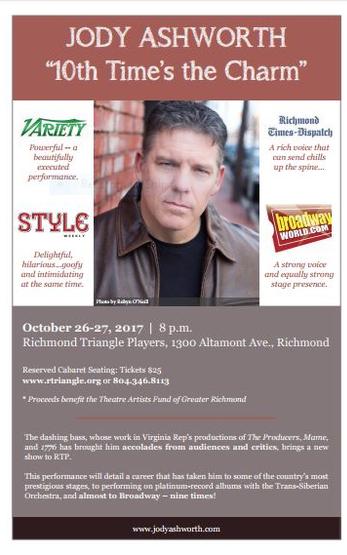 Jody will appear in Season 3 of Legends and Lies--The Civil War. This 10-part series profiles notable figures in American history through re-enactments, interviews with descendants and historians, and archival photographs, shedding new light on these figures and their stories.

With the knowledge of leading experts to paint a new picture of the figures who now fill our history books, Legends and Lies separates fact from fiction and paints all-too-real portraits of  the men and women who defined the course of a nation. From Abraham Lincoln to Ulysses S. Grant, from John Wilkes Booth to Stonewall Jackson, experience the personal triumphs and failures  of these  individuals as they transform a country into a battlefield, and in turn define the United States of America.